Welcome to Blake Lively Source, your #1 fansite and guide about the actress Blake Lively. We work to provide you with the latest news, photos, videos and more! We hope you will enjoy our site and we encourage you to visit us again to get the latest updates on Blake.
Published on In
Gallery News

Blake’s favorite food may come from O Ya restaurant, she highly thanked the restaurant on her own Instagram post to her hubby noting that it was that restaurant in Boston where the two met and now they are celebrating his birthday at their NYC location. 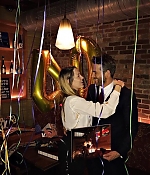 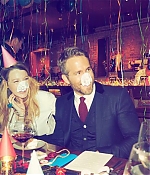 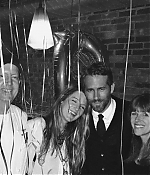 Furthermore, she credited the restaurant for having the “BEST” food and being the couple’s “favorite.”

Lively and Reynolds are seen gazing into each other’s eyes, Lively’s hand on his shoulder (a very Romantic Comedy Poster set up), as—yes, there are layers within layers here—Reynolds holds a picture of the two, making the same pose, in a shot taken five years prior. Per Lively’s caption, we learn that the 35th birthday celebration took place at O Ya, a Japanese restaurant in Boston, whereas the current shot is taken at O Ya’s New York outpost. (You just know Lively has been orchestrating this celebration plan for months now. There were probably three notebooks filled with brainstorming about the streamers alone.) “We fell in love at your restaurant in Boston,” she wrote, “We stay in love at your restaurant in New York.” (If O Ya hasn’t scrapped its current awning this morning for a large sign that says “This is where Blake and Ryan Stay in Love,” they need new management.)

O.K., now here is where Swift enters the picture. The singer and Lively have become fast ultra-best-friends, as we all know very well. Swift reportedly arrived at the hospital to see the actress after she gave birth a few weeks ago, and other reports claim she recently went to spend a few days with the couple at their compound in Pound Ridge. Anyway, the singer reportedly commented on Lively’s Instagram last night, “Thanks guys, Now I’m drowning in tears of joy.” (Will Lively and Reynolds get a song like 1989’s “You Are In Love”—which was written about Swift’s friends Jack Antonoff and Lena Dunham—on Swift’s next album?! Or, more to the point, will it be called “Live and Let Lively” or not?!)

Reynolds also posted a shot from the festivities, and his picture adds a whole other layer of complexity. In his picture from the dinner party, Lively and Reynolds are sitting at a table in the restaurant wearing what look to be rabbit-nose masks. He wrote, as a caption, “Best. Birthday. Everrrrr. Courtesy of my wife, buddy, and international spy, @blakelively. With huge thanks to my favorite restaurant in NYC,@oya_ — and a special shout out to our children for not ruining everything like they planned.”

All I see Is You (New Stills)

‘All I See Is You’ Bought by Open Road