Welcome to Blake Lively Source, your #1 fansite and guide about the actress Blake Lively. We work to provide you with the latest news, photos, videos and more! We hope you will enjoy our site and we encourage you to visit us again to get the latest updates on Blake.
Published on In
Articles & Interviews Gallery News Talk Shows & Interviews

The 32-year-old actress is in town promoting The Rhythm Section, and she was asked about her new baby girl, who is around five months old.

“At one point we had three [kids] four and under,” Blake said, before being asked what it’s like going from two kids to three kids.

“It’s like going from two to 3,000!,” Blake responded. “We have so many children. We’re outnumbered. And it’s a lot. People say that going from 2 to 3 it’s the same. Those people do not have three kids! It is crazy.” 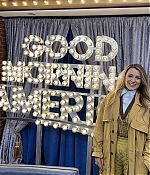 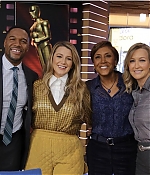 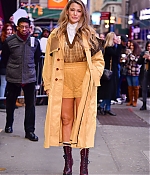 Blake and Anna on BBC Radio 1

The Making Of (2023)
Blake as ??
Long-married filmmakers have cast overemotional actors to portray their younger selves in the story of their great love. Unfortunately, by the time shooting begins, their fabled marriage is unraveling.
News  Photos  IMDb
Proxy (??)
Blake as ??
A woman miraculously reawakens after a medical trauma to discover her consciousness has been embedded into a bio-synthetic body.
News  Photos  IMDb
The Husband's Secret (TBA)
Blake as Cecilia Fitzpatrick
The lives of three women all come crumbling down after one of the women discovers a secret letter written by her husband.
News  Photos  IMDb