Welcome to Blake Lively Source, your #1 fansite and guide about the actress Blake Lively. We work to provide you with the latest news, photos, videos and more! We hope you will enjoy our site and we encourage you to visit us again to get the latest updates on Blake.
Published on In
Events Gallery

They hold the Hollywood power couples’ crown for some of the cutest red carpet moments. And as Blake Lively glittered at the Met Gala on Monday night, actor Ryan Reynolds simply couldn’t hide his adoration.

The 29-year-old looked fierce in a plunging gold gown, setting the blue carpet alight with an electric, feathered flame design at the train.

The eclectic ensemble by Atelier Versace made the starlet look like a tropical goddess. Blake’s gown had her body draped in golden chains rather than fabric, still expertly hugging the Age Of Adaline actress’s svelte figure.

On top her gown dipped low to reveal her tanned chest while the long-sleevedfrock transitioned into a wild feather train. Making a bold contrast with its gilded top, Blake’s train consisted of gold and blue feathers, trailing behind her elegantly.

We have added over x100 photos to the gallery… 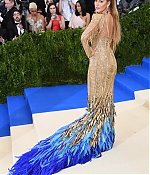 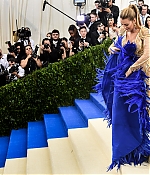 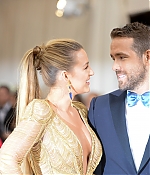 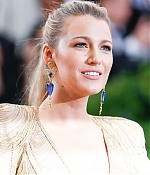 More ‘Gossip Girl’ On The Set
Michael Kors in NYC