Welcome to Blake Lively Source, your #1 fansite and guide about the actress Blake Lively. We work to provide you with the latest news, photos, videos and more! We hope you will enjoy our site and we encourage you to visit us again to get the latest updates on Blake.
Published on In
Gallery Magazine Alert Magazine Scans 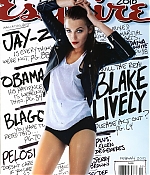 Blake Lively takes her first cover of 2010 on Esquire! She looks incredible, can’t wait to see the full shoot.

Turns out, playing a Manhattan socialite is easy. At least, it is for Blake Lively.

The blond beauty, who plays the wealthy Serena van der Woodsen on the hit series Gossip Girl, says that slipping into character is a cinch for her.

But these days, Lively is trying to leave that comfort zone behind.

Her upcoming big screen flick, The Town, which co-stars Ben Affleck, features Lively as a poor woman from the wrong side of the tracks, who even gets assaulted in one scene.

“It was crazy,” Lively tells the mag, which hits stands on January 19. The actress also spills about her on-screen romance.

“I have a sex scene in this film and that’s never comfortable,” she says. “You think, ‘Oh, this is going to be so awkward.’ But this scene isn’t supposed to be a steamy one — it’s sort of tragic. … I’m pretty much crying in it.”

Her next role will also be a step away from Serena’s Upper East Side world. In 2011, Lively will star opposite Ryan Reynolds in the superhero film, Green Lantern.

The 22-year-old actress also tells the magazine that she’s learning to trust her instincts when it comes to choosing projects.

“It’s like when you do SAT questions,” Lively says. “Go with your first choice. It’s been proven that your first choice is often the right one … ultimately it’s a movie. It’s not like I’m a doctor.”

Filming for Green Lantern starts in March, with an expected June 2011 release date. Her film, The Town, is scheduled to open on September 10.