Welcome to Blake Lively Source, your #1 fansite and guide about the actress Blake Lively. We work to provide you with the latest news, photos, videos and more! We hope you will enjoy our site and we encourage you to visit us again to get the latest updates on Blake.
Published on In
Gallery Magazine Alert 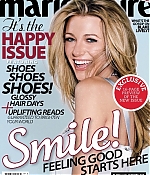 Blake is on the April cover of Marie Claire too. It’s old images but stunning as always and here is some of the article.

Playing Gossip Girl‘s queen of the Upper East Side – in a wardrobe to die for – has propelled Blake Lively to It girl status. So how does a 21-year-old former class president cope with instant celebrity?

Are you surprised by the impact Gossip Girl has had?

Just the fact that it’s airing anywhere else is unbelievable. It feels like everybody’s playing a big hoax on us.

Is it true your brother Eric whisked you away on a tour of Europe to convince you to become an actress?

I was 15, he was 21. It was an amazing trip; he took me to London, Cambridge, Rome, Brussels, Cologne, Florence and Paris, staying everywhere from five-star hotels to hostels. But every single day he’d be like, ‘What are you going to do for a living?’ He told my mom that he would be taking me out of school for two weeks and he ended up keeping me out for a month and a half. I got a much better education about world history in that time than I did in my entire high school life.

You’re dating one of your co-stars, Penn Badgley. Is that out in the open now?

I don’t like to talk about it because there are very few things that we get to keep private. You see these people who fall off the edge and it seems they have given the media all of themselves. It is hard that people don’t just let you do your job and then carry on your own life.

You’ve said you’ve only kissed three boys in your life.

I didn’t have a boyfriend until I was 17. There were boys at school that I would find out later had a crush on me but I was too shy to talk to them.

You’ve got a dog, a Maltipoo, called Penny. Are you close?

She’s my constant companion. Dogs know when you need them. I thought it was wonderful when Mickey Rourke thanked his dogs at the Golden Globes. He said that when he was at the lowest point in his life, they were there when no-one else was.

Let’s go a little shallow. Who was your favourite Spice Girl?

Baby Spice. I even had her six-inch platform tennis shoes.

When was the last time you cried?

When Obama won, I got teary-eyed.

When and where are you happiest?

I love being at home and cooking and baking.