Welcome to Blake Lively Source, your #1 fansite and guide about the actress Blake Lively. We work to provide you with the latest news, photos, videos and more! We hope you will enjoy our site and we encourage you to visit us again to get the latest updates on Blake.
Published on In
A Simple Favor Candids Gallery

Blake has been photographed shooting scenes for her new movie A Simple Favor in Toronto, Canada.

The film is a thriller about a mommy blogger in a small town who discovers her best friend has vanished.

In some photos Blake wore an orange jumpsuit and was spotted giving her little girl a tour around the movie set as she played with her. In another her face was bruised and bleeding while she was surrounded by police officers.

Blake was seen talking to her director Paul Feig who is best known for his Melissa McCarthy comedies Bridesmaids, Heat and Spy. Also in the film is Anna Kendrick, Sarah Baker, Henry Golding, Glenda Braganza and Joshua Satine.

Filming will take place for the next several weeks in Toronto with additional shooting in Los Angeles. We have added over x100 photos to the gallery… 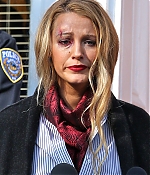 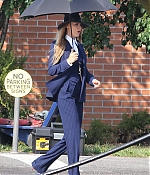