Welcome to Blake Lively Source, your #1 fansite and guide about the actress Blake Lively. We work to provide you with the latest news, photos, videos and more! We hope you will enjoy our site and we encourage you to visit us again to get the latest updates on Blake.
Published on In
Candids The Rhythm Section

Jude Law joined Blake on the set of The Rhythm Section in Dublin, Ireland on Sunday. Blake has also unfortunately injured on the set, with production temporarily suspended.

A spokesperson for the film confirmed to The Hollywood Reporter that Lively “sustained an injury to her hand while filming an action sequence” and that “filming has been temporarily suspended” as a result.

“Production will resume as soon as possible,” the statement adds.

A synopsis for the film reads: “A woman seeks revenge against those who orchestrated a plane crash that killed her family.” 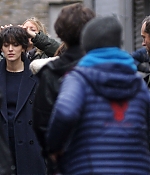 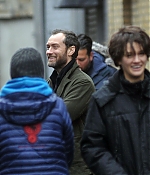